These songs are dedicated to you Gayle. And for our reunion on Saturday, 5 April 1986.

24 years, 5 months, 21 days have gone by…and though you have crossed the veil of this life,

I still count the days until we are reunited once more. 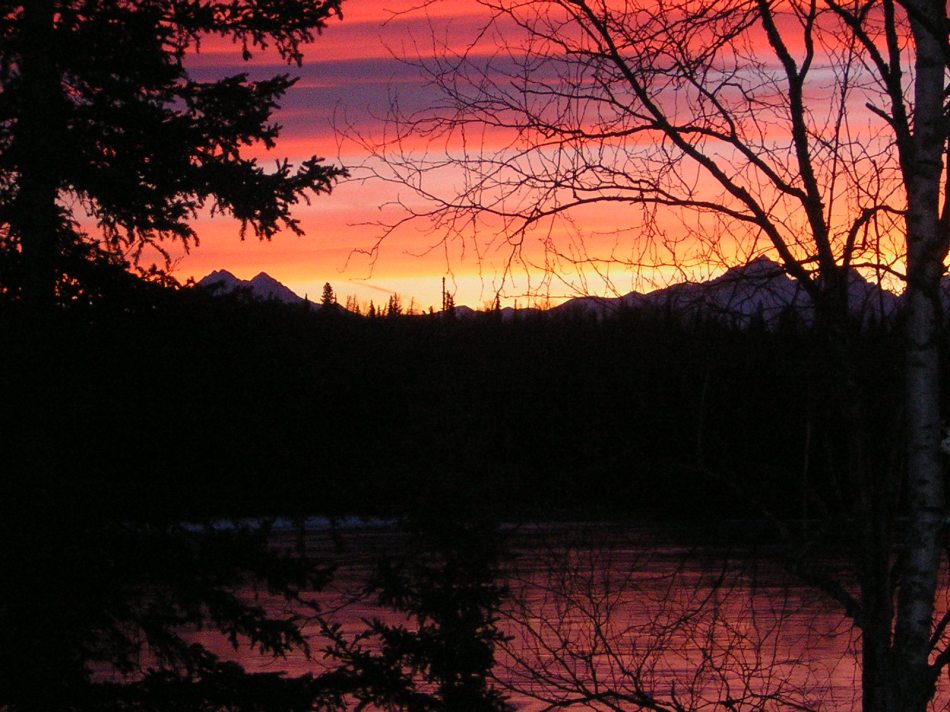 On that Saturday of our reunion, Gayle and I drove from Anchorage out to my Birth family’s home at Rainbow Lake. Needless to say, it was an emotional day. Even my Mom, who lovingly supported my quest to find my Birth-Family, and to learn my history, shed a few happy tears at seeing my long dream of meeting my Birth Mother fulfilled.

During the drive we talked, haltingly at first, but soon enough the dam burst, and we made peace with the long years of separation. And we have Paul Simon to thank for releasing the deluge of emotional turmoil. For during the drive this song came on the radio, and within a minute Gayle and I were pulled over on the roadside, hugging, crying, and laughing. As we shared a moment of beautiful synchronicity.

For that, and all that came after, I will always be grateful.

So began a lifetime of friendship and love.

On 10 February 1968, two young people, deeply in love, made what is among the most painful decisions a parent can make. They gave their firstborn child up for adoption. I was that child, and decades later Gayle would confide in me that over the long years she never gave up hope that one day we might be reunited.

My adoption was not an act of running away, despite their youth. No, it was a sacrifice they made out of love, and the needs of their child. Because it really was the best for all involved. Neither did they give me up to the first couple they encountered. Far from it, Gayle interviewed many until she found what she was seeking. Not without Michael’s help, you should understand; but I’ve been told that Gayle was a Mama Grizzly Bear in her drive to find what she considered the right family. Through a collusion of Providence itself and my truly formidable Birth Grandmother, Jean Paal, they found a couple who would love me unconditionally. And she chose well, for those I call Mother and Father raised me as their own. Though my Dad has passed, today I am as close to my Mom as any friend, and love her as she loves me, unconditionally.

So it is with my Birth Family, whom I was joyfully reunited with on my 18th. year. So much more than my birth mother, Gayle was among my closest friends, my ally and confidant, my cohort in a chaotic life. Her wisdom, and the loving fierceness with which she lived her life inspires me every day. So too, I am blessed to know and deeply love my birth father, Michael.

Although I miss her profoundly I know in my heart that she has found Peace.
Her bright Spirit walks a new path beyond this life.
Yet the loving memory of Gayle Janecek will remain with us always. 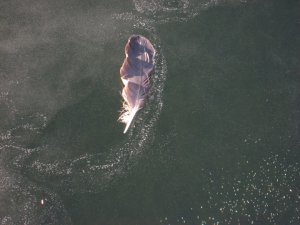 Repeat after me: I am free

It was in the season of twilight
when you broke-trail ahead of us
and died after living joyously.
To live, we must do the same.

Autumn is a season of paradox.
Precarious, yet resplendent
as the circular relationship
between Water and Stone
between Rabbit and Fox.

In every day moments unfold
both of rapture and sorrow;
living to live teaches us
the truth of the ineffable Now
without seeking an unreachable tomorrow.

Free Rabbit Living teaches us
that every day is a good day to die.

As you have left us,
so too the Moon is leaving Earth.
Naught but a fraction in each season
’tis true, but ultimately vast
set against the dominion of space and time.

In a Danse Majesté, with Her
we are but crossing paths.
We waltz, with lonely Sol calling the rhyme
—in the silence we shall part,
to the inevitable we must relent.

While of the grief
we can only endure
until its razor edge
is ground dull by love.

Let us raise a glass then:
to lavish time
that sliver so thin
which is granted to us.

Repeat after me: I am free

On this night, 120 years ago, Vincent van Gogh passed from this life. He died in the presence of those he loved and who loved him. A rare blessing in his last days of torment and despair. Much has been written of his suicide, the painful details have been etched into history: That on 27 July, he finally lost the battle with the acute Depression he had been fighting for so many years; that he walked behind a haystack in a field where he had been painting and shot himself in the chest.

The bullet missed his heart and lodged in his chest, making it possible for him to walk back to the Ravoux Inn, where he had been staying. His brother Theo arrived the next day and stayed by his bedside, where Vincent quietly smoked his pipe, until the end.
Clinging to life for two days before succumbing to the injury, Vincent van Gogh died in Theo’s arms at 1:30 am on 29 July 1890.

Such was the bond between the brothers that Theo’s grief likely contributed to his death six months later, after protracted illness, on 25 January 1891. Today, at Johanna van Gogh-Bonger’s behest, their graves lie together beneath an ivy shroud, planted from the garden of Vincent’s physician and friend, Dr. Gachet.

Described as Grief-stricken by their mutual friend, Emile Bernard, Theo van Gogh would later write to their sister Elisabeth, “He himself desired to die. While I was sitting by him, trying to persuade him that we would heal him, and that we hoped he would be saved from further attacks, he answered, ‘La tristesse durera toujours~The sadness will always remain~’ I felt I understood what he wished to say.”

~The Sadness Will Always Remain~

Reportedly, these were among Vincent’s last words. Yet the melancholy, the archetypal mad artist, would not be the only legacy Vincent van Gogh left to the world.
Far from falling into obscurity, as he believed he would, instead the world has come to cherish the genius, the vision of van Gogh.
A vision unique; one that changed the very way we perceive art, and the artist. I dedicate this poem not only to Vincent, but to Theo, who never gave up on his brother, who in many ways made Vincent’s oeuvre possible. With this poem, written with the utmost respect and empathy, I seek to drag the spectre of Mental Illness out into the light, that others who suffer may know that you are not alone.

On this 120th. memorial of the death of Vincent van Gogh, let us celebrate his life and the illumination he provided the world, which is his true legacy.

i.
Thirty good and wholesome
townspeople of Arles, neighbors all,
have had your yellow house closed by the cops
And you, Vincent, saw your worst fear come to pass
as, at last, you were hauled off to the Asylum.

There it took three days of solitary
confinement to regain your Self.

Gauguin is gone. It is true, Paul has left:
but not before it was too late
to stop the juggernaut of sorrow and arrest.
(and by the way, Paul Gauguin
you windbag, you…cross-eyed thief,

it had been raining for days on end—
how did you hear his footstep
so soft behind you in the downpour?
In the darkness, without lamp or light—
how did you see the blade with which
you claim Vincent menaced you so?)

ii.
You are scared now, Vincent…aren’t you?
All about you are the insane and their keepers.
Have you come to believe the vicious gossip?
Has it truly come to that at the last? Madness?

Or is it a worse ailment? Failure.
Not as an artist before the public,
that fickle beast, you know too well

it was never really about acceptance
rather, a failure to render your vision into reality.

That, I fear, is what broke you—so finally, so completely.
Now, you are surrounded by chaos and heartbreak.
Bedlam brimming in broken minds: without order, without colour,
as if you have been cast upon a fey, monochrome wind.

Alas too, the sky above you has become foreboding,
pressing upon you as much so as the pressure of poverty
skulking in the shade. For to be a burden upon Theo
and his family is a thing you loathe most of all.

There is so much that I will never understand.
Yet, this I truly know, Vincent:

Hunger is nothing next to Emptiness
(don’t believe? try it.)
—a hideous non-thing that steals away our very senses.

Of emptiness there can be no solace.
It is a thing every suicide instinctively knows.
In the end, it is not loneliness, but emptiness
which we seek to escape; and by which we are undone.

iii.
The sky, hitherto your collaborator,
your vista upon a far too vivid Now, is shuttered.
It has become a coffer of looming cobalt clouds.
In this Now, even absinthe and spirits cannot ease the pain
or bring surcease to the seizure and the sorrow.

Smiling a scarecrow smile to even behold it—

the sunlight which was once your gilded muse,

once your benevolent ally in a hostile world,

huddles forlorn in your cell

caught in a corner of the ceiling

where your brush cannot reach.

A sun that is present only amidst fields

populated by an unkindness of crows.

Furrowed ground lies beneath hulking slate-blue skies
and wheat sheaves, bound into pyre-like haystacks,
which you have roughly carved in cadmium and ochre
on a canvas barely able to withstand your demands.

Although they make much of the crows,
it is the blackviolet vault of the sky
which brings a stab of empathy
for the agony and despair of your last days.
Thunderclouds roiling greyblue
broken by oblique rays of a mantled, yet majestic, sun.

Oh, they make much of the crows, but…no, Vincent,
it is the turmoil of the skies that signaled your peril.

more words on ashes and loss

Grief is the circling of our hearts against the unknown.
Devoid of boundaries, or limits of space and time,

grief cannot be “gone through”, cannot be fled from;
it must be allowed to permeate, then endured—no more.

Grief the Bogeyman waits around every corner
to remind us of the fear rooted in our chests.

Hidden within our lullabies, woven into our faery tales,
grief is the pitiless Taskmaster

teaching us to treat each day
as if it were our last chance to make things right.

We must make our peace with grief at every chance.
Because every day, often in each moment,

grief confronts us, assails us
with the terrible finality of its truth.

For grief is the acknowledgment that, at the last,
we face death alone, taking with us only memories

of those we love beyond the bright gates.
We who remain must learn to dance on the ashes of our loss.