Our world at times feels alien; a bedlam full of hostile places, a wasteland vast with no oasis—
Our world is teeming with the strife of war, the spectre of genocide.
The chasm between wealth and poverty grows with every hour.
While with mighty armies and high walls behind which they hide,
Evil men rule the day, grasping at their chains of power.

In a land held hostage, with even the name of the country in contention, though recognized by the UN with little dissension—and even less international aid, hardly worth the mention—the nation now called Myanmar reels with anguish and persecution. Even as it stands at the brink of Freedom.
Tremors rumble across the country, as more and more Burmese begin to resist, only to be struck down.
Yet for every one returned to the Earth, another rises.

With this poem I address the Junta of Burma. Ruthless, blood-hungry Generals with your dispassionate decrees, and Death Squads set loose like jackals upon your citizenry. Right down to the faceless functionary, with a fraction of power to be wielded mercilessly—your pens are as bloody as any sword could hope to be.

Humbly, I beg you, wipe clean this awful slate, upon which you write Burma’s fate: turn away from the empty security of a Police State.
It is better to have freedom with danger, than to have security with slavery.
I beg you, fuel the ember of compassion within you, which you have secretly protected against the long winter of fear.

Finally, I beg you, for the sake of your people, set free Daw Aung San Suu Kyi. 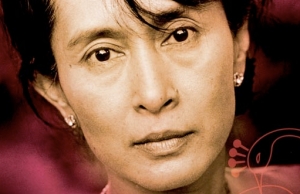 Their alms bowls overturned in protest,
begging instead for peace, for an end to slaughter,
thousands of Buddhist Monks are marching
in solidarity, in despair, on the streets of Sittwe.

Armed only with prayers, they stand against soldiers

when they were tear-gassed

and beaten with batons.

In Mandalay, they march fragile seeming
against armored thugs with riot-guns.

However, a human at one with the Universe
cannot with beatings or bullets be quelled.

In Rangoon, they rise against a tyrannical regime
…just imagine all of that orange and saffron

clogging the streets with prayers,

Now citizens, men and women,
young and old alike, who would
normally stay out of the troubles,
are linking arm in arm
to protect these monks

who beg alms to feed the hungry and the outcast
whose lifelong service and selfless
sacrifice have made them truly holy.

Later that day, gutters ran with blood for rain—
a saffron river to dispel discontent in those who remain.
And what of the monks taken alive? 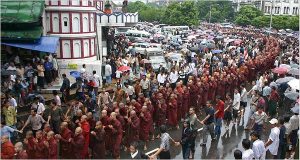 This entry was posted on November by Dawn Runs Amok. It was filed under Hoi Polloi—Protest and Dissent, Poetry by DC McKenzie and was tagged with Aung San Suu Kyi, Buddhist Monk, Burma, Junta of Myanmar, Myanmar, poetry, protest.